Conquest of the Seven Seas (Docudrama)

Ferdinand Magellan and Francis Drake were no adventurers at all? But what did the two circumnavigators do instead? Two of today’s researchers search through the archives, trying to reveal the true purpose of the missions of Magellan and Drake. They reinterpret old and new sources. The result of this profound, documentary search for traces: Both explorers were on their way on behalf of their sovereigns. The goal: nothing less than the world domination. In a never-before-seen aesthetic with 3-D animations and digitally edited reenactments, this documentation shows that today’s globalization had already begun in these times.

Magallanes, the conquest of the world (Docudrama)

Original Soundtrack by Gonçal Perales from “Magallanes, the conquest of the world” (2014) directed by Holger Preusse.

Magalles, la conquista del mundo is the story of the fascinating explorer Fernando Magallanes, whose ship was the first one sailing all across the world. 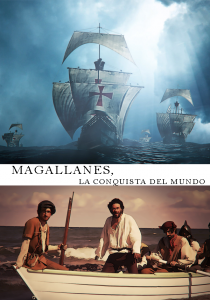